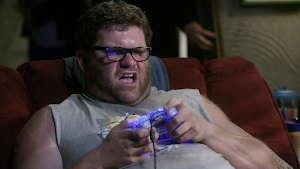 Chicago, IL (3:00 a.m. CST)–In what is being described by gaming media outlets as “a spectacle of gaming prowess,” Chicago resident Ahmed Dabbousi spent the entirety of Laylat ul Qadr (“The Night of Power”) unlocking the equivalent of 1000 months worth of Xbox achievements.

Spectators came and went as the gaming savant effortlessly unlocked new levels, earned new player skins, and climbed the leaderboards on several servers, all on the holiest night of the year. “I feel at ease,” said Dabbousi. “It’s like the angels were there with me, guiding me to the right vantage points in Halo 4.”

Sources say Dabbousi had been preparing for this holiest of nights since the start of Ramadan. “I was there when he made a sincere prayer to live until Laylat ul Qadr so that he could head shot NarutoKid89 for the equivalent of 1000 months,” said childhood friend Yaseen Nasri.

Following his achievement, Dabbousi graciously signed t-shirts embossed with “I liberated Arkam City x 1000″ and “Night of Pow(nage)er” for his fans. “It’s a humbling achievement,” said a visibly emotional Dabbousi. “Next year I plan on texting Aisha for the equivalent of 1000 years.”

Yahya Ridwan is a staff writer for The Hummus. He may be reached at hello@thehummusnews.com.