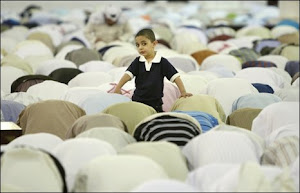 San Diego, CA (7:30 P.M. PST)- Local annoying child congregant of the Islamic Society of San Diego, Sameer Yunus, age nine, announced his retirement from running between the prayer lines at every given opportunity this evening after ‘isha prayer.

Sameer, known by his contemporaries as “Stealth Sameer,” made the announcement after a slew of tough weeks in which he was unable to cross the entire prayer line before the congregants bowed in prostration, resulting in several collisions. “I stand before you a proud annoying kid, a dignified annoying kid, and a humbled annoying kid,” said Sameer during the announcement. “You know, as you get older, the prayer lines just seem to get longer; the younger kids are both smaller and more annoying,” he continued.

Sameer’s departure from the prayer line running circuit has arguably thrust his foremost rival, Jameel Hussain, age seven, to the forefront of the sport. “Sameer will be missed,” said Hussain. “He practically invented the loud spaceship sound that these kids make as they run through the prayer line.”

Jameel won’t be without competition, however, as Ayoub Faris, age five, has indicated his interest in taking over after escaping from the babysitting lounge twice. “I have a lot of respect for Jameel as a competitor,” said Faris. “But when you’ve escaped the closet that they call a babysitting room under Auntie Nabeela’s watch, it’s time for a new challenge.”

Despite his departure from the sport, Sameer is optimistic that his experience at the mosque presents him with more opportunities. “I think I’ll become one of those kids that repeats after the imam out loud so everyone can know that I know Surat Al-Fatihah.”

Yahya Ridwan is a staff writer and Pacific Region correspondent for The Hummus. He can be reached at the.hummus.news@gmail.com.