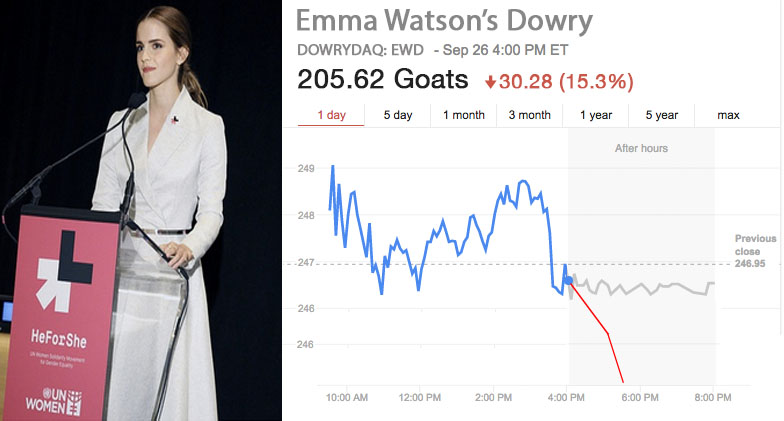 “We knew it was going to drop after she used the word ‘patriarchy,’ but no one could have predicted this steep of a drop.” Memon is referring to Watson’s value on the Dowrydaq, an international index that tracks and predicts the dowry of “shameful unmarried women and/or witches.”

Up until last week, Watson’s dowry had been steadily rising with each progressive Harry Potter movie she starred in. “We saw her dowry explode to almost 250 goats after the release of Harry Potter 7,” remarked Memon. “At that rate, she would have been worth approximately 15 camels by 2015.”

Memon’s optimism regarding the value of Watson’s dowry has since then waned. Watson’s speech–in which she called for men to stand up for the equal and fair treatment of women–has caused consumer confidence to plummet over the past week. “Should women have bathrooms? Yes. Should they have a place to sleep? Sure. But equal treatment under the law? Okay, now you’re insulting our investors.”

Watson’s speech was also viewed by misogynist elite as a gateway to other horrible policies, such as “regulating child labor and  minority rights,” according to Memon. “This is the type of risk that keeps good, male, wealthy, investors from being confident in highly questionable markets.”

“Usually I advise single males looking to invest in a dowry to wait until it’s cheap but still has potential. In this case, we feel that Emma’s strong feminist push gives her limited positive outlook for Q2 and Q3. We’d advice against that dowry and suggest a mail-order bride instead,” said star analyst and sexist Ranzi Suhoor.

Despite the bad news for investors, Memon pointed to a silver lining in the post-speech chaos. “We can safely predict that shares in  male-only  public amenities will see a boost over the next year.”

Layla Sabry is a staff writer and World News Correspondent for The Hummus.