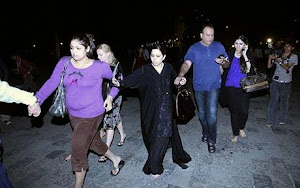 Columbus, OH (8:00 P.M. EST)– Forty-five congregants of the Sultan Masjid are recovering in their homes this afternoon after last night’s harrowing seven-hour-long fundraiser.

Several witnesses watched with horror last night as a notable guest imam, Ahmed Bassem, relentlessly solicited funds from the already depleted congregation. “I drove by the masjid and I could hear the speakers blaring. The accent was thicker than usual, so I knew it was a fundraiser,” said 28 year-old Sarmad Khan. “You can’t un-hear something like that. ‘Who will give $100,000?’ is still ringing in my ears.”

Congregants trapped inside the mosque expressed the gauntlet of emotions they experienced as they realized they were trapped in a fundraiser. “At first I thought it was just going to be another post-’isha reminder about how everyone was going to hell, but then they started passing those wooden boxes around,” said 31 year-old taxi driver Mahmoud Yunus. “I kept trying to leave, but each time another one of those volunteer kindergartners armed with pens and fundraiser envelopes would flank me.”

Other victims described the grizzly scene chalk full of merciless hadith-quoting and unfulfilled promises to end the fundraiser after “the next $1000.”

We spoke to one survivor of the stand-off who recounted his horrific experience. “Jameel was sitting right next to me when it happened. He pretended to be late for a meeting, but that didn’t work. As he stood up, the imam asked him if he “loves Allah enough to donate $500, just $500.’ Next thing I know Jameel disappeared into a crowd of those militant kindergartners,” recounted Moath Sulaiman.

Last night’s fundraiser brings the total for this year to 985 fundraisers, which has ISNA concerned. “We must urge all mosques to limit fundraisers whose proceeds will not be provided directly to ISNA,” said spokesperson Abrar Haider. “And seriously, no amount of samosas after Eid prayer can make up for this egregious violation of human dignity.”

Although steps are being taken to end the practice, incidents of impromptu fundraising have been on the rise according to PH.D and researcher Aneesa Wael. “At first it was just one time during Ramadan between Isha and Taraweeh, and people turned a blind eye. Now we’re seeing anything from Tuesday post-maghrib fundraisers to those odd after-khutbah-before-jummah-prayer fundraisers. Is that even halal?”

This latest incident only serves to underscore Dr. Wael’s findings. But for survivors like Moath Sulaiman, the research is too little too late. “You know my wife didn’t even TiVo Mad Men? I’m just in the process of trying to pick up the pieces.”

Layla Sabry is a staff writer and World-wide Correspondent for The Hummus. She can be reached at the.hummus.news@gmail.com.