In a Show of Nationalism, Turkey Bans Chicken 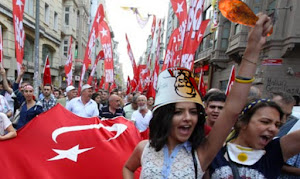 Erdogan laid out his multi-pronged approach to combatting the serious issue beginning with the establishment of CARE (Chicken Abuse Resistance Program) to remind children how yucky Chicken is and how yummy Turkey tastes. Next, Erdogan plans to unilaterally pass a multi-tiered law punishing anyone in possession of over 2 ounces of raw or grilled chicken with imprisonment.

Oligarchs around the world lauded his tough-on-anti-nationalism stance, especially the multitiered system. “Anyone possessing over 8 ounces of skinless chicken or any quantity of fried chicken, because of its especially addicting anti-nationalistic powers, will be shot on the spot,” according to Erdogan’s Press Secretary who delivered the remarks at the Presidential Palace’s Halal KFC. The third prong is to prohibit the protesting of reasonable Turkish actions, especially the banning of chicken for its citizens.

Academics like University of Ankarra Political Science Professor and Erdogan’s golf partner, Dr. Ozil Mehmet, agrees with the government’s efforts: “Turkey’s economic and political problems stem entirely from the fact that people are allowed to eat and sell chicken in public. This law is a panacea for the improvement of Turkey’s government and will set a standard for other Middle Eastern government’s to follow.”

At press time, Michelle Bachelet, the President of Chile, promised to raise her country’s GDP and make healthcare affordable by banning bell peppers and jalapeños.