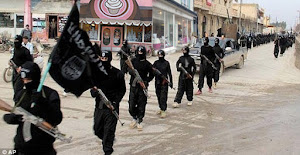 “We predict that our forces will retake control soon, depriving ISIS militants of access to a variety of occasion-themed cupcakes,” said Al-Abadi. The cupcake shop is considered an ISIS stronghold, known for supplying countless fighters with high-end baked goods made entirely from organic, fair-trade ingredients.

The United States D.O.D. made the following statement:

“We are monitoring the situation in Tikrit closely. It is our strong belief that allied Iraqi forces will soon regain access to such flavors as Marvelous Marmalade and Summer Sweet Squash within the next several hours.

We will be providing further details as they emerge.

ISIS has publicly issued a warning to the Iraqi government, stating in part that “any attempt to remove even a single bowl of Lavender Love icing will result in renewed attacks on nearby regions.”

Despite the warning, Al-Abadi remained resolute. “It is only a matter of time until our brothers and sisters are enjoying hand-crafted sprinkles atop moist, gooey cupcakes.”

Yahya Ridwan is a staff writer for The Hummus. he can be reached at hello (at) thehummusnews (dot) com.