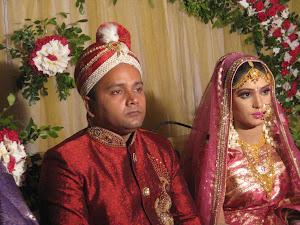 Noting that Hassan and Fatimah are three weeks into their marriage and seem unhappy, sources confirm that the two are questioning whether the sex was worth getting married at 20. “I don’t think Hassan realized that there are 23 hours and 59 minutes and 50 seconds every day in a marriage where you have responsibilities,” says Ahmed Naseer, Hassan’s community college IM basketball teammate. “I should know, I’ve been married for three months.”

Having proposed to Fatimah two days after accidentally making eye contact, Hassan now wonders if he should’ve waited an extra week. “Maybe I rushed it? I don’t know, we had an emoji conversation and she sent me a picture of her hair – so I definitely knew I had to pull the trigger.” Hassan began as he simultaneously tried to figure out what a joint tax return consists of. “Sometimes I just wish someone told me that marriage is forever and sex is two minutes, twice a week, if I do the dishes.”

Fatimah had a slightly different take on the matter, “It’s nice to get out of my parents house,” Fatimah said while trying to pick out a college major, “I feel like marriage has opened new doors for me, like not having to show my parents my grades and choosing what I want for dinner.”