Meet Your Caliph: An In-Depth Interview 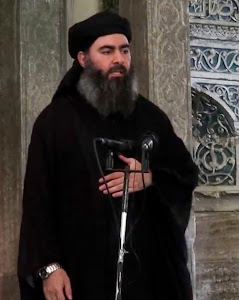 Abu Bakr Al-Baghdadi is a complicated man. He steps into the interview room sipping a Caramel Javiva from Peet’s™. “Starbucks isn’t even trying anymore,” he remarks as he wipes the blood from a dagger in his other hand. Stepping onto the international political scene last June with his ascension to divinely appointed leadership, he remains an enigmatic and mysterious figure to the majority of his seven billion subjects. The Hummus decided to sit down with the Caliph to learn more about the man behind one of the hottest new hashtags on Twitter, #ISIS.

Q: What is your political ideology, in one sentence:

A: I think most political theorists would refer to me as a theocratic socialist, which sounds sophisticated and helps me justify some of the crazy shit I do.

Q: What can you tell us about your primary political opponents?

A: They won’t be available for any interviews.

Q: What are your priorities as the Caliph of Earth?

Q: Who is your favorite fictional superhero?

Q: How do you plan to support the national economy?

A: Stimulate the theft, extortion, and ransom market by injecting capital into the private sector.

Q: Do you have any views on global climate change?

A: First of all, we should be referring to this pressing issue as “global warming.” The phrase “global climate change” was coined by conservatives seeking to obfuscate the scientifically verified phenomenon. We must address the issue immediately. Without an internationally-recognized plan the climate will continue to deteriorate, eventually resulting in wide-spread ecological harm to many regions of the world.

A: Is that even a question? Tupac.

A: Oh gosh, you’re kinda putting me on the spot here . . . well, I’ve seen tons of videos of people flying in hot air balloons on Youtube. I haven’t been able to kill anyone with a hot air balloon yet, so that’s still on my list. That and visiting the Amazon rain forest.

A: So next question please.

Q: Okay, well it looks like we have time for one more. What’s the next big move for the Office of the Caliphate?

A: You know, really being a good Caliph is about having an open dialogue with your subjects, allowing them to express their disagreement, their concerns, and so on. And then killing them. So yeah.

Yahya Ridwan is a staff writer and Global News Correspondent for The Hummus. He can be reached at hello(at)thehummusnews(dot)com.