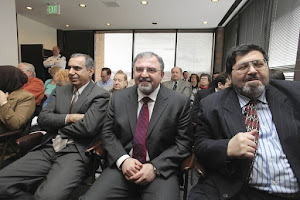 Chicago, Illinois (7:30 P.M. CST)– Members of Iman Masjid in downtown Chicago announced this evening that they had unexpectedly made a well thought-out reasonable decision that directly aids their community.

Speaking after ‘isha prayer, president of the mosque, Sameen Yaqub, explained the accidental process by which they made progressive steps. “Well, we were initially discussing the need for a giant awesome water-slide, men’s only of course,” said Yaqub. “Somewhere in the discussion we got derailed and ended up solving the mosque’s parking situation.”

Yaqub conveyed that the board of directors “takes full responsibility for this mistake” and that “it will definitely not be repeated,” immediately before locking in the congregation for “surprise fundraising night,” a local tradition cherished by masochists and board members alike.

Members of the congregation were utterly stunned, unable to understand how such a reasonable logical decision could have been made. “We elect these board members to ensure that absolutely nothing gets done and to over-emphasize gender issues,” said Ahmed Ramadan. “It just puts you on edge when you hear that actual problems are being addressed.”

Despite the mistake, the board regained confidence from the congregation after announcing “phase 40″ of construction featuring a diamond-encrusted chandelier to be displayed in an inaccessible secret conference room.

Ashraf Qasim is a staff writer and Central Region Correspondent for The Hummus. he can be reached at the.hummus.news@gmail.com.