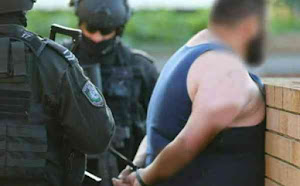 Dallas, TX (1:00 P.M. CST)–Leaders at the Maryam Islamic Center in downtown Dallas announced this afternoon the capture of the elusive Juma’ah Fart Bandit, known for his ruthless and indiscriminate farting in the men’s prayer hall every juma’ah.

The Fart Bandit, who has since been identified as 32 year-old Ahmed Khan, a local grocery clerk and loner, was taken into custody by the Dallas Police Department today before the Friday sermon without incident. Authorities believe Mr. Khan is a lone wolf and do not suspect a greater ring of Fart Bandits working in concert.

Mosque leadership credits the installation of three new heat vision cameras in the prayer hall, which captured Khan in the act approximately twelve times during last week’s Juma’ah prayer. “We were both impressed and horrified at Mr. Khan’s ability to conceal his identity,” said Board Trustee Naser Siddiqui. “The video demonstrates that we were dealing with a professional.”

Most congregants reacted to news of Khan’s arrest with cheers and congratulatory hugs. Some of those who were victims of Khan’s potent arsenal or whose family members had been victims lost their composure, breaking down into tears.

“It’s been a little over a year since I was first attacked,” said a visibly overwhelmed Yusuf Shah. “I’m just glad that this nightmare is over and that my children will grow up in a safe, flatulence-free prayer hall.”

The FBI is now looking into whether Mr. Khan is connected to a string of related devastating Juma’ah farts throughout the greater Dallas area.

Yahya Ridwan is a staff writer for The Hummus. He can be reached at hello (at) thehummusnews (dot) com.