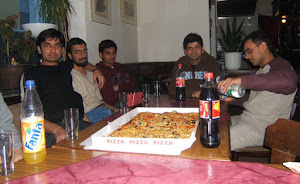 Ann Arbor, Michigan (7:30 P.M. CST)– The president of the local Muslim fraternity Halal Haram Halal (“HHH”) confirmed this afternoon that they will be hosting an intense no-holds-bar pizza party this weekend.

President Mamduh Sarwar made his intentions clear at a press conference packed with Muslim parents and bored elders from the Muslim community this afternoon. “We understand the reservations some people might have toward a co-ed pizza party,” stated Sarwar. “But rest assured, only Sami Yusuf’s music will be playing between what will otherwise be a variety of Shaykhs denouncing opposite-gender interaction. We think the level of shame will be more than sufficient.

Despite Sarwar’s assurances, he made it clear to the 15 people in attendance that his administration has made no plans to hold back. “We aren’t going to acquiesce to a prudent standard, so the pizza party will continue well into the 8:00 P.M. hour.”

HHH has come under fire before for similarly extreme events in the past. Most notably, they were threatened with an eternity in hell-fire by everyone over the age of forty-five last week for hosting a symposium featuring such segments as “Careers In Social Sciences For Men” and “Sometimes It’s Okay to Not Eat Meat,” both of which caused a firestorm in the Muslim community.

Despite their mothers holding out on cooked meals, members of HHH say the pizza party will go on as planned. “We can’t allow our opinions to be stifled simply because they are unpopular” said senior member of HHH Hamza Rafoor. “Unless our mothers stop making desserts. You just don’t mess with that. It’s in our charter.”

Ashraf Qasim is a staff writer and Central Region Correspondent for The Hummus. He can be reached at the.hummus.news@gmail.com