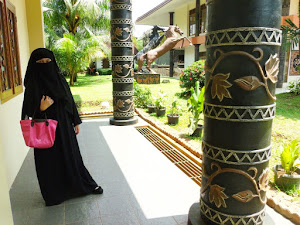 Local niqabi Hanan Ayoubi announced today on her Facebook page that she would be going as a “sexy tablecloth” for Halloween this Friday.

The announcement attracted the ire of Muslim and Non-Muslim men alike, most of whom criticized Ayoubi’s “inability to respect how women should dress.”

Yusuf Sultan, who is going as “Shirtless Batman” for Halloween, explained that Ayoubi’s choice will cause an unnecessary distraction. “The last thing we need is someone like her inflaming the passions of men who are sexually distracted by a plain, black, 100 thread-count table cloth.”

Robby Denton, president of Alpha Sigma Pi at USC felt that Ayoubi’s decision amounted to cultural appropriation. “This is an injustice to the tradition of overly-sexualized costumes we have come to value as a community of fraternities. A right has been taken from us,” said a visibly shaken Denton. “At least it’s better than last year when she went as ‘Dark Casper.’”

Despite the criticism, Ayoubi announced that she “really, really cares about what complete strangers think of her attire.” She will also be addressing any questions in her daily public forum–”Are You Oppressed?”–tomorrow morning.

Layla is a staff writer and Halloween Correspondent for The Hummus. She can be reached at hello(at)thehummusnews.com