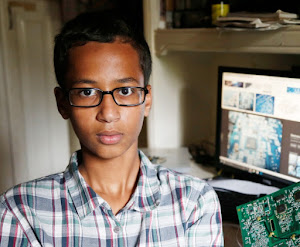 Washington, D.C. (8:00 A.M. EST)–President Obama has announced that he has invited a fellow Muslim, 14 year-old Texas 9th grader Ahmed Mohamed, to the Whitehouse to share his homemade clock with the staff.

Although Obama is Shia, he reached out to Sunni Ahmed in light of his controversial arrest due to what some have referred to as racial and Islamophobic treatment by McArthur High School officials. Obama has not yet announced where he and Ahmed will be attending the Jummah prayer this Friday, when Ahmed arrives at the Whitehouse.

Sources close to the Whitehouse have suggested that Obama and Ahmed will discuss several common interests, such as science, technology, and the strength they draw from praying five times a day. It remains unknown whether Obama will gift his favorite prayer rug to Ahmed as a sign of solidarity.

Yahya Ridwan is a staff writer for The Hummus. He can be reached at hello(at)thehummusnews(dot)com.