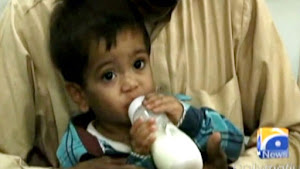 Lahore, Pakistan (3:00 P.M. GMT)– Police Chief of Lahore, Ahmed Shafique, announced at a press conference this afternoon that baby Musa Khan will plead down to a single charge of Bottle Laundering, a crime that, according to the Chief, “doesn’t clearly exist in the Pakistani penal code.”

Baby Musa Khan gained international attention after being arrested for his part in a ruthless attempted murder of several utilities workers in Lahore two weeks ago. International pressure from liberal pro-defendant led to the charges being dropped against Musa, a well-known toy-thrower and inconsiderate-farter. ”We’ve never been able to pin him down on these more heinous offenses,” declared Shafique. ‘But with the grace of God, this time Musa Khan will repay his debt to society.”

The news of Musa Khan’s plea deal was met with mixed reactions by local residents. “I’m just happy they were able to get him off the streets,” commented 45-year-old Nasima Sadik. “Even if they got him under some other pretext, I’m happy there is one less murderer to worry about when we walk to the market.” 32-year-old Yusuf Salman, on the other hand, expressed his frustration with the plea deal. “I’ve known Musa for all nine months of his life. He isn’t responsible for the attempted murderer, even though the evidence of his guilt is overwhelming.”

The Police Department’s spokesperson claims that Musa’s involvement with the flourishing Lahore  Bottle Laundering scene became obvious as the investigation progressed. “There were little signs everywhere,” claimed Musharaf Maqbool. “How was he drinking so much milk in such little time? Why did he stutter and babble throughout our interrogation? Not to mention the attempted murder on his rivals.”

The plea agreement states that Musa Khan will cease any and all commercial transactions until the age of 3, when he will be forced to register as a convicted bottle launderer.

“We recognize that the botched investigation into Musa’s involvement with the attempted murders has hurt this office’s credibility,” commented Shafique. “Musa was clever enough to hide his tracks, and we should have known better than to finally pin him down on such a well-orchestrated crime.” Chief Shafique went on to describe his optimism concerning his office’s image with the news of Musa’s “fatal slip-up with his bottle-laundering scheme.”

Musa Khan was available for comment, but quickly and permanently became distracted by a bird outside the window.

Tawakul Sayed is a staff writer and international political correspondent for The Hummus. She can be reached at the.hummus.news@gmail.com.