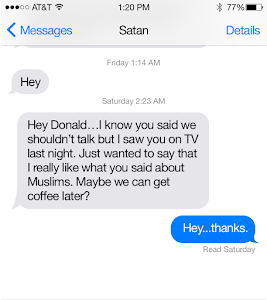 Satan–a former adviser to Trump during the protracted 2011 “Birther” movement–lost contact with Trump after a falling out last year stemming from a dispute over which of the two was more eternally damned.

The latest incident highlights a well-documented one-sided relationship that has publicly unfolded over the last four years.

Yahya Ridwan is a staff writer for The Hummus.