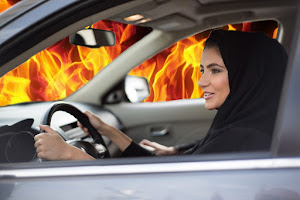 RIYADH – Local Saudi Arabian woman, Hussa ibn Yahya, has accidentally crashed her husband’s Range Rover straight into a portal to Hell. Despite the better judgement of her male chaperon, Hussa ended up driving the car into eternal damnation.

Marwan ibn Faraj, a top Saudi official was absolutely horrified by the news, “This is why women are not allowed to drive in Saudi Arabia, Hell portals don’t appear for no reason.” Since implementing the rule, Saudi Arabia has been relatively portal free and would like to keep it that way. Although Hussa’s hubris has broken the veil for Shaitan & Company, Ibn Faraj believes this is something that Saudi Arabia can recover from.

“The accused should have taken a taxi or Uber,” Ibn Faraj stated, “Saudi Arabia is a much safer place when a woman is not driving and instead alone in a male stranger’s car, with power locked doors.”