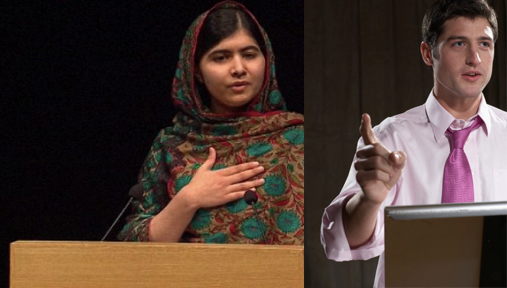 Branson, MO (7:00 A.M. CST)–Speaking from a local cafe at an impromptu press conference late this afternoon, local white guy James Sullivan beamed with joy as he accepted thanks for having rescued Nobel Peace Prize winner Malala Yousafzi from “the throes of inadequacy,” clearing the path for her success.

Spectators wearing “We Saved A Brown Girl” t-shirts and waiving confederate flags cheered as Sullivan explained that he wasn’t the only one to thank for Malala Yousafzai’s accomplishments.

“I’m not the only white guy from Missouri who blogged about brown guys and how scary they were,” said a humble Sullivan. “Without the likes of other white guys around the nation, I don’t think I would have been able to earn Malala’s Nobel Peace Prize.”

Sullivan insisted that he does not seek praise for his heroic leadership, and doesn’t expect Malala to share the prize’s cash award. “I’m not asking for my half of her money because she’ll need all she cash get to buy enough Mountain Dew and AR-15 rifles to be considered an American.”

Other white guys in the crowd applauded as the modest Sullivan described his great act of sacrifice.

“Honestly, he’s an inspiration to all of us. I’ve been monitoring the efforts of hard-working brown women across the world without expecting any accolades, and it’s all because of James’ leadership,” said Elmer Meyers. “Who knows? Maybe I’ll be signing autographs the next time a women from the Middle-East achieves something, but that probably won’t be for a while.”

As the press conference drew to a close, the crowd erupted as Sullivan walked off stage.

“I accept Malala’s Nobel Peace Prize, but I do so reluctantly.”

Yahya Ridwan is a staff writer and Nobel Peace Prize Correspondent for The Hummus.