Portland is busy making its final preparations for the annual International Wudu Olympics, set to take place in precisely one month. The event has attracted upwards of 9000 wudu enthusiasts in recent years, and organizers predict that this year’s event will see the largest crowd yet. With all the hype surrounding the IWO, we decided to rank the top five contenders set to compete in the most prestigious wudu event of the year. 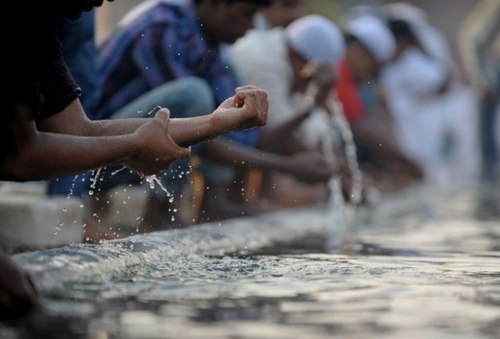 Power. Speed. Water. These are the only words to describe Mohsin Tarif’s rise to the top of the international wudu competition circuits. Mohsin came from humble beginnings, winning his first regional wudu competition in his local Sarasota, Florida. There he wowed the judges with his ability to dip both arms entirely unnecessarily into the sink at the same time. The ferocity of his nose-blow is nothing to be downplayed, as the force behind it has been measured at 45 pounds per square inch of pressure. Mohsin went on to win the Sink Battles 300 and Wild Water Slaloms which took place in the Nile River. Mohsin is predicted to make a solid showing at his first ever IWO appearance, where he plans to unveil the loudest wudu-related snort any Muslim has ever heard. Being the most seasoned competitor at this year’s event, Sherief has the distinct advantage of having participated in prior events with this year’s judges. Over the years, he has perfected his techniques in the Random Belch, Water Fling, and Power Snort segments of the competition, claiming the top rank in each of these categories for the past 12 seasons. Despite his experience, many analysts believe that Sherief’s age has inhibited his ability to adapt to the extremely competitive younger competitors on the circuit. His inability to grow a staggeringly large beard has inhinited his ability to drip water from the wudu area all the way to the prayer hall on a consistent basis. But what Sherief lacks in drip-power, he makes up for in the public bathroom category, being able to frighten Non-Muslim strangers with his foot-to-sink routine better than his younger, more socially integrated competitors. Arif stormed onto the wudu competition scene three years ago with his miraculous over-time win over then defending world champion Safwat Ahmed in his first ever IWO appearance. The rest is history. Arif has taken away two silver medals and one gold in his only three appearances, managing to move past Asmar on the world rankings. His patented hair swiping technique has become an international obsession, inspiring merchandise commemorating the so-called “Arif Swipe”. But Arif is no one trick pony. In his past 12 competitions, Arif has thrashed around the most water of any of his competitors, managing to waste approximately one lake’s worth of water in each event. Despite his success, Arif’s recent injury in the California Wudu Classic concerns analysts, who warn he might not be able to spit out water as loudly and obnoxiously as he once could. Shadi is the youngest competitor in this year’s IWO, but he is by no means the least dazzling. Shadi’s combination of superior water-dripping, loud gurgling noises, occasional conspicuous farts, and water-on-mirror techniques have taken the wudu world by storm. His success doesn’t surprise many analysts, who credit most of Shadi’s refined technique to his late father Talha Shadi, the hall-of-fame wudu champion and well-known wudu trainer. Some analysts have gone out on a limb, making Shadi their pick to win it all this year. Others believe his inexperience will prove too much to overcome in a competition with such seasoned participants as Sherief Asmar and  Safwat Ahmed. Nonetheless, no one disputes his big-play potential and ability to render any bathroom unsafe. There isn’t much to say about Safwat Ahmed. The reigning IWO champion and 15-time Wudu Warrior Medalist has yet to lose a single wudu competition in the last two years. Safwat’s flawless water displays and unsolicited wudu suggestions have put him ahead of the competition. His training regiment is known for being the most rigorous, consisting of 35 mandatory wudu sessions each day with his world-famous trainer Amu Tubtub. Most analysts see no reason to predict the end of Safwat’s reign, considering him to be at the height of his wudu career. With nothing to hold him back, Safwat looks primed to destroy any bathroom configuration the organizers of the IWO can muster. And for that reason, he tops our list.

Saleem Jawad is a staff writer for The Hummus and United States Regional Correspondent. Saleem can be reached at the.hummus.news@gmail.com