With the majority of the votes counted, Egypt’s New Constitution seems set to become the supreme law of the land, for now. With 98.1% of voters approving it, the constitution will take effect as the most popular decision since the 99% voter support for former president Hosni Mubarak. As men and women across the country rejoiced at the hope of a stable future, one 4th grader sat quietly in his room, alone, overtaken by emotion. 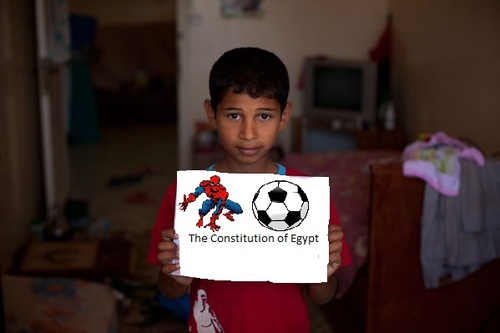 At first, Musa Hamdy seems just like your average 4th grade boy. He goes to a public school in the heart of Cairo, enjoys Saturday morning cartoons, and plays soccer at the local boys’ club. But this isn’t just any local Egyptian boy. Musa is the primary author and editor of the nation’s new constitution, his best piece of writing in his entire 5 month career. Musa was first recognized when he came in 12th place at a 3rd and 4th grade writing competition last July, being able to spell almost half of the words in his piece correctly. Musa quickly rose to fame as he published such short stories as A Pony Is Like Horse and When We Count It Is With Mouth. The three-page-long books each topped Egypt’s best-seller list for three weeks straight despite their challenging concepts and writing style.

Demand for Musa’s literature in Egypt skyrocketed as more and more Egyptians devoted themselves to what Al-Ahram News called “enlightenment in an age afflicted with darkness.” The statement by the government-controlled news source resonated strongly with the people, who accepted the challenge of a new renaissance. With his popularity mounting, Musa released his third publication, I Have Fingers Because Human Not Hooves, in September of this year. The new 2-page pamphlet of a crudely drawn mix between a horse and bear was critically acclaimed. Al-Ahram’s lead art critic and interim Egyptian president Adly Mansour called Musa’s newest piece of literature “the only free press necessary to convey the true spirit of Egypt. All other speech would detract from this beautiful sophisticated message.” Authorities were moved by the famed art critic’s review and swiftly moved to suppress all further speech, in order to preserve the magnificence of the publication’s message.

Despite his popularity, Musa never could have expected the call he received on the morning of October 12th. His philosophical concepts, 7th grade writing level, and amusement with chocolate had caught the attention of constitutional drafting authorities. One such drafter commented that Musa’s writing had “inspired a nation to reconsider their purpose on this planet. Why are we here? What do we do next? Why do we have fingers and not hooves?” Musa had been chosen as the chief drafter of the new Egyptian constitution.

The task was never an easy one, and Musa spent days in isolation trying to find the right words. Eventually, after weeks of hard work, Musa emerged with his draft of the constitution.

But what makes this piece better than his previous ones?

Leaving aside the importance of this document, one must consider it’s elegant simplicity. “I tried to think the way I used to think when I was in 2nd grade, that’s when did my best drawings of spoons.” Musa went on to explain how most of his inspiration came from “thinking about what Bugs Bunny would do if he was writing it instead” and “rolling around on pieces of paper and seeing what ended up on top.” Bugs Bunny, of course, is well-known for the timeless lessons he taught the previous generation of Egyptians.

Now, Musa sits at his windowsill, contemplating the nation he has helped shape. “You know, it was more funner than even soccer with uncle Basheer,” he whispered from across the room. “I can’t wait to write the next one.”

Ahmed Rahil is a staff writer for The Hummus and Middle East News Correspondent.