Cupertino, CA (10:00 A.M. PST)– Apple representatives were pleased to announce the release of Apple TV For Muslim Mothers this morning at their headquarters in Cupertino. The much-awaited device will feature several Muslim Mother-centered features, including set-up instructions for them to skip over entirely,  Tea On Demand, and a panic button that interrupts sons to figure out what’s wrong with the device. 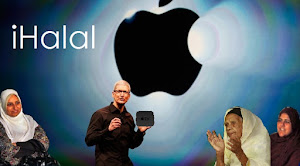 Apple seems to have struck gold with its most anticipated feature of all, the “Fast Forward Through Entire PG-13 Movie” button, which will be included in every device. The button will allow mothers to wantonly skip over essential portions of a movie’s story-line with the simple press of a button.

‘Apple TV For Muslim Mothers’ product manager John Alexis says his team was just responding to popular demand. “Muslim mothers who were able to figure out how the internet works overwhelmingly called for the inclusion of this feature,” said Alexis. “Our only regret is not being able to fit the ‘Random Abdel-Halim Hafiz Song’ button into the device as was also requested.”

Muslim mothers across the nation expressed their excitement and concern over the new Apple TV’s functionality. “Apple took a step in the right direction today. This way I won’t have to worry about my 19 year-old son accidentally understanding the plot of any movie,” said Marwa Noor. “With the new button,  I feel safer about my son enjoying movies for approximately the entire opening credits sequence as I intently look over his shoulder.”

Other mothers were not as impressed, saying that key safety features were left out of the latest release. “So I’m supposed to sit there and fumble around for the remote during The Lion King because it’s rated ‘PG?’ I don’t buy it,” said Kawthar Yusri, mother of 26 year-old Ahmed.

Tech analyst for PowerCrunch Michael Roberts praised Apple’s move. “Reliable studies indicate that Muslim mothers regularly fast forward ten minutes past the end of a kissing scene. With this button, Muslim mothers don’t have to worry about whether or not the ‘haram’ part has ended; they can just fast forward to the credits.”

Hamza Khan is a staff writer and tech correspondent for The Hummus. He can be contacted at the.hummus.news@gmail.com