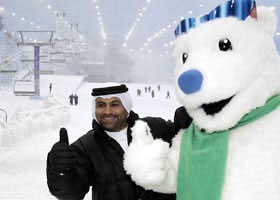 Asif Mubeen, one of the five downhill skiers for the Lebanon team, described the team as “eager to compete” despite being held up because of family obligations and other mysteriously vague impediments. “We’re all very inspired by the peaceful serenity of Sochi- during the hustle and bustle of the Olympics no less,” said Mubeen.

The team’s spokesperson, Ayman Wadi, expressed his excitement over the Olympics and the ability to compete against internationally recognized athletes. “It’s clearly an honor to make it back here for yet another competition,” Wadi said to The Sochi Local Times. “We’re thrilled that we made it here earlier than we did last time.”

At the last Winter Olympics, Lebanon arrived a mere 8 weeks after all the competitions had ended, marking a new record for their team. “We don’t thing arrogance is the best approach to such an accomplishment. On the contrary, we’re humbled by the fact that we are missing every single competition by a smaller margin every four years,” said Wadi.

Despite the improvement, Winter Olympics officials are not as impressed. “They missed everything. Every time I sit down with one of their officials and explain how the Winter Olympics work, he serves me tea, extols the vices of ‘hib hob,’ and tells me to ‘calm my little nerves.’,” said Competition Committee Chairman Johan Menditlez. “We started telling them the Olympics were in June like 20 years ago, but somehow they keep showing up after literally every event has concluded.”

The team has announced its intention to depart for the 2018 Winter Olympics “after they pick up the cake from the grocer down the street.”

Sameer Mitwali is a staff writer for The Hummus and International News Correspondent. He can be contacted at the.hummus.news@gmail.com