Tafilah, Jordan (10:00 A.M. GMT)– Zookeepers and government officials at the Tafilah Municipal Zoo welcomed a small grey bear thing to the facility today. The small furry creature will be on display at the zoo during regular business hours. 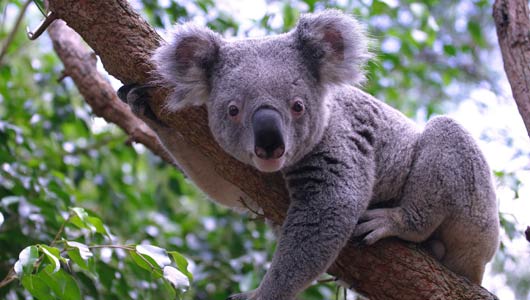 Haroon Subhi, the head zookeeper and regional governor, voiced his excitement over the arrival of the novel creature. “We’ve never seen anything like this. By now, we’re probably the envy of every zoo out there. It’s like a baby bear, but it an adult and it stays up in the trees all day. We haven’t completely confirmed which planet it’s from yet,” said Subhi. The creature drew scores of visitors this morning, causing a mild traffic jam at the park entrance. “I’m just as eager as anyone to feast on its flesh,” said an unkempt Babba Shimshim. “If it accepts me as its father, that’s a different story. Look, it’s all here in this book I found by the creek.”

Despite the excitement over the creature, zookeeper and staff member Saad Ismail of the facility has contested the official preliminary report. “It’s a koala,” Ismail declared quietly before being abruptly interrupted by  Subhi and two armed guards. Conspiracy theories like Ismail’s are not uncommon, with the majority of individuals we polled suggesting that the facility knows more about the dangerous beast than it was willing to convey. “Listen, all I’m saying is that if it’s NOT the Dajjal, then why won’t they let me see it’s forehead?” said Hamza Kashif. Others, like Sayed Mahfooz  were critical of the zoo’s “no physical contact” policy, calling it “a means of concealing the demon’s fiery skin” and “a pretty clever way of protecting Satan’s agents, if you ask me.”

With all the controversy surrounding the latest arrival, zoo officials have begun selling special “demon-resistant protection spray” at the front gate in order to protect “the curious and brave among us.” The spray will be sold at a premium due to its high blessing content, according to government officials.

Saad Ismail is expected to complete his statements after he returns from the pressing chore he had to complete behind the abandoned stable.

Ahmed Rahil is a staff writer for The Hummus and Middle East News Correspondent.