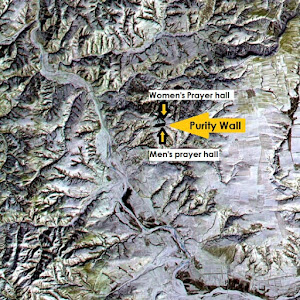 The new gender separation wall measures 235-feet in height and 120-feet in width, in violation of every zoning code in existence. The wall’s lead designer, Haroon Waleed described the project as  a “protection against the boiling temptations of our youth” and “pretty freaking cool,” in a public statement earlier this month.

Masjid Al-Fatah’s Imam, Faisal Rizvi, confirmed the completion of the wall at a press conference this afternoon open to any and all men, whether they attend the mosque regularly or not. “We’re a community built on the principle of inclusion. Whether you’re a regular at the mosque or not, all men should be allowed to partake in this festive occasion.”

Despite the wall’s magnitude, more conservative members of the mosque expressed their concerns. “I don’t think this is going to prevent those with smoldering temptations from frantically scaling the wall, somehow magically descending from it on the other side, and convincing someone to engage in sin. That’s an issue this liberal executive board is yet to address,” said 67-year-old Junaid “Uncle Grumpy” Baig.

“I’m okay with the size of the wall, but we shouldn’t be stretching the truth, it’s not observable from space,” said a concerned Ibrahim Safri. “Space doesn’t exist, so you can’t see anything from there.”

Masjid Al-Fatah announced that women will be allowed to fully express their opinion about the new wall by thinking about comments that they would make if they were allowed to speak.

Ashraf Qasim is a staff writer for The Hummus and United States Central Region Correspondent. He can be reached though our email address at the.hummus.news@gmail.com