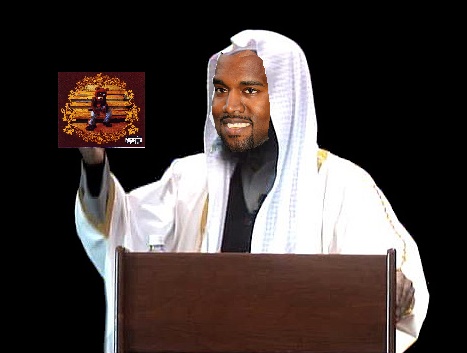 Los Angeles, CA (1:30 P.M. PST)– Congregants of the United Deen Mosque were reportedly surprised this afternoon after guest speaker Kanye West remained relatively docile and focused while delivering this Friday’s Sermon. The sermon was geared toward the youth, focusing mainly on the importance of fostering a spiritual connection with your peers, respecting your parents, and accurately selecting the best music video of all time.

Congregants exiting the mosque had mixed reactions, with the older ones feeling less than enthusiastic about Kanye’s performance. “I was really disappointed in the mosque’s inability to guide Br. Kanye in how to deliver a successful sermon. He didn’t reference anything from his Graduation album and failed to juxtapose himself with the greatest scholars from history,” said a seemingly bereft 45 year-old Abdul-Nasir Muhsin. “The mosque is not a toy for the board of directors to play with, it’s a place of worship.”

The majority of congregants, ages 16-30, felt otherwise, describing Kanye’s sermon as “an important reminder of the social ties we must foster” and “pretty cool since he is Kanye.” We spoke with Suhail Aslam, a local 25 year-old software engineer who was pleased with the sermon.” At first I was worried that Kanye would awkwardly reference some of his newer material, which I’m sure no one listens to. But I was pretty happy when instead he dove into a spiritual colloquy about understanding our role in society and how undeserving individuals like Taylor Swift may be rewarded in lieu of someone more deserving.”

Aslam’s views were shared by 19 year-old Hameed Tariq, a student at Los Angeles City College. “I think the older generation is having trouble reconciling their old values with the modern world, and that’s okay. But eventually they will have to accept that Kanye’s Yeezus and Watch the Throne are here to stay.”

Despite his discontent with the sermon, Muhsin says he can learn to live with the newer more humble Kanye. “It’s just hard, you know? You take your lunch break thinking ‘okay, this is gonna be insanity,’ but then it’s all this talk about fostering ties between and among ourselves. I just wish he would have declared himself king at least once.”

United Deen Mosque has announced plans to bring in Samuel L. Jackson for a sermon in the near future.