Washington D.C. (9:00 A.M. PST)— Representative Michele Bachmann of Minnesota’s 6th District announced the results of her independent investigation into Holy Christ Gatherings Church on the corner of 3rd and Milcase streets this morning. Among the findings, Bachmann uncovered what she called “the creepiest creep of Sharia you could ever imagine” and “A clever effort, right down to the worship of Jesus Christ and the full-time, paid Minister.” 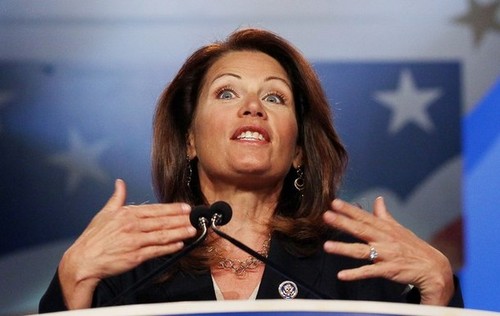 The 44-page report outlines the overwhelming evidence of Holy Christ’s secret Muslim identity. Among the proofs were “Holy Christ’s dedication to interfaith collaboration,” “lack of Muslim-bashing propaganda,” and “Christmas decorations coming down merely four weeks after Christmas.” The damning evidence of Holy Christ’s absolute devotion to an Islamic Caliphate was provided by what the report calls “a picture of a bearded man, seemingly deified, above the alter,” which Bachmann calls a rare slip-up for the otherwise cunning Victory Mosque.

Bachmann’s investigation was conducted in the wake of the infamous decision by Dan’s Donuts on 23rd street to stop selling bacon cheese melts after 2 P.M. “We all knew sharia had something to do with it, that’s totally a sharia thing,” said Randall Garrity, local anti-government activist and part-time sales rep. at Rapture Clothing Inc. “I’ll admit, they almost had me with the full-service Sunday morning worship, bible studies, and vigils in memory of St. Paul’s legacy.”

Colin Ayers, Minister of Holy Christ denied the allegations which he called “unfounded and highly objectionable to men and women of faith.” Local Bachmann supporter Anita Sanders was unconvinced. “Ayers, if that’s his real name, has a history of extremely subtle sharia-creeping. He studied at Trinity College, then became a ‘minister’ overseas in France, where he also started the organization Putting Jesus First, clearly all part of his tactical yet ultimately unconvincing cover-up.”

Bachmann has called for an immediate town hall meeting to discuss the threat of creeping sharia like that of Holy Christ Gatherings. The meeting will also focus on other suspected creeping-sharia establishments, such as Rick’s Bagels, which recently raised the price of its famous ham sandwich to $5.99 in what Bachmann has called “the clearest indication of  ham-based creeping sharia yet.”