Houston, TX (6:45 PM CST)— Delta Airline’s Flight 532 to Dallas, TX was forced to make an emergency landing only 13 minutes into its flight after discovering that Muslim passenger Ayman Mahmoud was barely smiling and sat near the middle of the plane rather than the extreme back row. 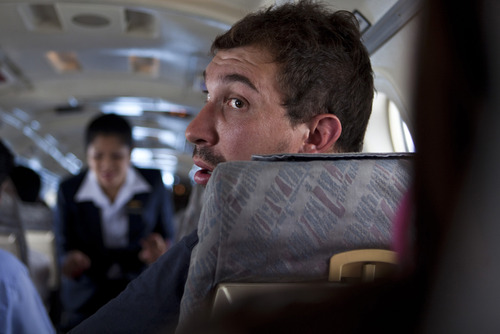 Passengers first alerted flight attendants of the issue after Mahmoud sat down and began scrolling through his phone instead of nervously sitting with his hands in his lap and smiling at the strangers around him. “I was going to give him a few minutes to settle in to be fair, but then I noticed that he continued to seem only mildly amused with the contents of his phone,” said passenger and Houston native Alex Gardner. “It didn’t help that he was wearing comfortable clothes instead of expensive ones that demonstrated his willingness to live rather than kill us all.”

The FAA trains stewardesses and flight attendants to deal with situations such as this one, says FAA spokesperson Sam Mayock. “The training manual that we distribute to each of these airlines contains a comprehensive list of warning signs and suggested responses,” said Mayock. The warning signs include “sitting down anywhere other than the back row of the plane,” “making normal human movements,” “using the bathroom,” “not using the bathroom,” and “reading anything that’s written in Arabic or some other terrorist language.”

Suggested de-escalating techniques include engaging the offending Muslim and seeing if they awkwardly laugh, as well as telling them about all the virgins on earth that they could choose from if they decided to stay alive. “Studies have shown that Muslims who don’t awkwardly laugh and become nervous every time a white person speaks to them on a plane are likely to be scary,” continued Mayock.

Flight attendant Anne Sanders quickly informed Captain Reeves about Mahmoud’s completely normal behavior, which prompted the captain to engage an emergency landing procedure known as Maybe Martyr Muslim, specifically designed to do absolutely nothing besides utilizing alliteration. Once Flight 532 had touched down, Mahmoud was asked to remain in his seat as frantic passengers exited the plane. Mahmoud was taken into custody where he was questioned by FBI agent Rudy Johnson. “We asked him why he didn’t put away his phone and stare blankly into his lap. Apparently he was reading the latest reviews on stereo speakers he was thinking of purchasing,” said Johnson at the press conference held later that afternoon. “I didn’t even know they could bring their stereo speakers to Heaven, this is going to be tougher than we had originally thought.”

Passengers exiting the plane were almost in tears as the realization that they were in danger of absolutely nothing washed over them. “What if he didn’t smile the entire flight? What if he was sitting there, reading a novel, thinking about what he was going to eat when we arrived in Dallas the entire time? It just makes me thankful that I’ll get to see my family tonight,” said an emotional Eliana Linton. “I noticed that he actually brought carry-on and I thought to myself ‘hmm, that’s odd for a Muslim who knows that we’re irrationally afraid of his carry-on being a bomb,’ but the fear really hit me when I noticed his composed demeanor when any white person spoke to him. It’s like he thought he was normal or something,” commented passenger Bill Ardeki.

Despite the incident, Mahmoud has been released from custody pending further investigation. “We sent him off with a stern warning: feeling and acting normal will cause you to seem suspicious. At all costs, do not sit comfortably and do not give any paranoid person any reason to believe you want to kill him for no apparent reason,” recounted Agent Mayock.

Ayman Mahmoud was not available for comment, as his perspective would humanize him.

Ashraf Qasim is a staff writer for The Hummus and United States Central Region Correspondent. He can be reached though our email address the.hummus.news@gmail.com