Washington D.C., USA (10:00 A.M. EST)— Commentators and policy analysts in Washington have expressed that the Pentagon’s relaxed new policy on religious attire will deal a huge blow to wholesome, patriotic, traditional racism and bigotry within the United States. 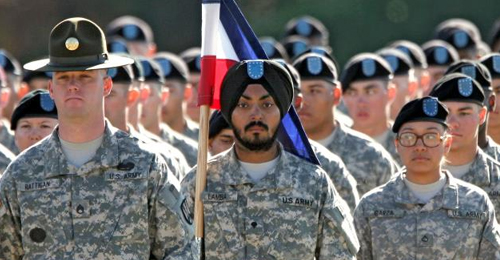 The new policy allows for limited alterations to military uniforms and grooming preferences, including a military issued turban or yarmulke, along with the permission to grow religiously suggested or required facial hair. Sophisticated Twitter reactions to the announcement included “yarmulke sounds like an animal I wouldn’t want to eat. Bad policy (Terry K.),” as well as “Next thing you know they will allow spiders as pets! They can sting you! Thanks, Obama…(Roger M.).”

Zuhdi Jasser, Vice Chair of the United States Commission on International Religious Freedom (USCIRF) took to the air today to announce what he called “the greatest attack on good ole’ fashioned xenophobia and bigotry since the Civil Rights Act of 1964.” Jasser pointed out a disturbing trend whereby Muslims have become more invested in the defense and service of their country, along with a disturbing dedication to civic engagement and social service. “I’ve run through all the numbers multiple times. the tradition of American bigotry is under attack in this country,” said Jasser.

Not everyone was as pessimistic. Well-known bigotry advocate and human-turnip hybrid Karl Rove believes the bigotry lobby is strong enough to recover from this downturn. “We knew this would happen sooner or later, that’s why we’ve drafted new legislation that would prohibit Muslims from requesting their rights,” said Rove. “The only exception is that Desi restaurants get to stay in business because seriously, if you haven’t tried chicken korma, you just have to.”

Representatives from the Pentagon were not immediately available for comment.

Zafir Mehdi is a staff writer for The Hummus and United States Central Region Correspondent. He can be reached though our email address the.hummus.news@gmail.com.