Muslim Man Faced With Choice Between Beef Jerky And Heaven

Orlando, Florida (5;30 P.M. EST)— Sources confirmed this afternoon that local University of Miami student Hani Rasheed was viciously faced with the choice between endless mouth-watering bliss and an after-life in heaven at the student store earlier today. 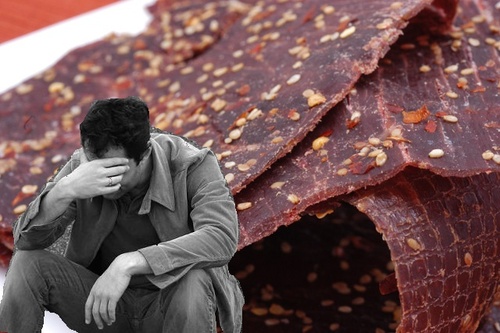 Witnesses to the event described Rasheed as severely distraught and visibly conflicted. “He paced the aisle with the beef jerky in it a few times, then shook his head as if to say ‘no, no’ immediately before shouting ‘there’s a difference of opinion!,’ grabbing the beef jerky, and running to the cash register,” said student cashier Marla Yu. Instead of paying for the beef jerky and leaving, Rasheed loudly proclaimed his love for eternal gardens and replaced the beef jerky on the rack in aisle 3. “I had never seen a man cry while smiling at a bag of jerky, so I was a little surprised.”

Muslim-Beef Jerky relations expert Priscilla Young says incidents like these are on the rise. “It’s clear we are in a time of great confusion. Last week I was called up to New York to deal with a man who had locked himself in a beef jerky factory, refusing to emerge until they were declared zabihah by his local religious scholar.” Despite the troubling data, Dr. Young remains optimistic that a more balanced approach awaits us in the future. “They’re rolling out the new spicy teriyaki stuff next week. That’s enough to swing anyone to the pro-beef jerky side of the discussion.”

Although future plans are being made to better educate beef-jerky users, Muslims like Rasheed are left to cope with the issue alone, lacking the proper guidance and resources to work through the decision on their own. “I let him sleep it off in the aisle, I figured he had been through enough,” said Marla Yu. “Eventually he walked out with a bag of chips while vigorously reciting something in Arabic.”

Khaled Shawky is a staff writer for The Hummus and United States Eastern Region Correspondent. He can be reached though our email address the.hummus.news@gmail.com.