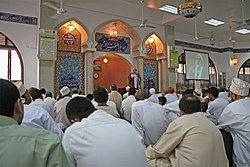 Birmingham, UK—Calls for the resignation of Shaykh Saleh Abu-Fasya have grown amidst the latest accusation that he continues to fart during khutbahs. Abu-Fasya has adamantly denied the allegations, calling them “politically motivated fabrications by a raucous minority.”

Abu-Fasya appears to be referring to the “Hizb-ul-Parking Garage” faction of his congregation, which has advocated strongly for a new parking garage in lieu of investments of donations into other mosque projects, such as the proposed indoor cricket arena.

The dissenting faction is led by Rauf Salemi, a local veterinarian and food blogger. He claims Abu-Fasya has manufactured support for other expansion projects and no longer represents the will of the majority. “This latest fart is the last in a series of many which have undermined his credibility with this congregation,” said Salemi.

Abu-Fasya has maintained power of the congregation for over fifteen years with little opposition, though outside commentators have questioned the sudden disappearance of many opponents throughout the years. Many of his previous opponents were banished after being blamed for mid-prayer farts that critics believe may actually be attributable to Abu-Fasya.

For his part, Abu-Fasya remains defiant. “I look forward to leading this community for many years to come. Safety.”