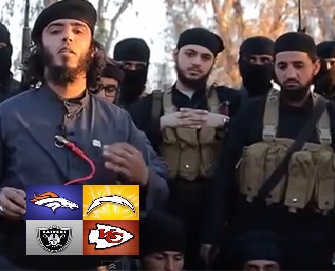 New York, NY (3:10 P.M. GMT)–Speaking from the back of his jeep, ISIS spokesman and in-house NFL expert Yusuf Al-Baltimori called on ISIS supporters in the west to “destroy the morally corrupt AFC West and its supporters.”

The internationally broadcast video– which has been authenticated by ProFootballTalk and Grantland–Al-Baltimori vows to destroy all Raiders, Broncos, Chargers, and Chiefs memorabilia under ISIS’ control.

“We, those who have chosen truth over falsehood, call upon sincere football fans to eradicate these four teams, especially the Broncos who embarrassed America and its allies last February at the Superbowl.”

The call to violence has raised concerns that emboldened Seahawks fans will respond to the incitement.

“We’ve been monitoring the situation closely, and we’ve determined that Seattle’s 12th Man is not a threat to the AFC West or America’s freedom,” wrote the Office of Commissioner Goodell. “Although the Oakland Raiders cannot beat the local high school’s football team, it is categorically impermissible for anyone to destroy the NFL other than Commissioner Goodell himself,” concluded the letter.

AFC West team owners and front-office officials are not concerned with Al-Baltimori, who they called “A disgruntled Ravens fan” who “couldn’t even beat the Jaguars with a rag-tag team of ISIS fighters” in a statement released on Wednesday.

This is not Al-Baltimori’s first international call to violence. Last month, Al-Jazeera released an authenticated recording in which Al-Baltimori declared a war against “brunette and redhead cheerleaders” and “light beer,” calling them “unacceptable in Islam.”

Yahya Ridwan is a staff writer and Football News Correspondent for The Hummus.