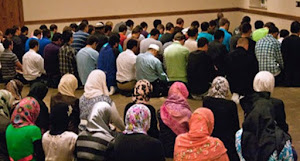 (Newark, NJ–9:00 PM EST)–Today, Imam Abdel-Latif Yusri of New Jersey’s Aisha Mosque announced that he will shutdown the mosque until he receives enough donations to build a five hundred foot gender separation wall. In a post-Maghrib speech, Yusri declared to the 44 congregants, of whom 20 were women, that countless female congregants were illegally crossing into the men’s prayer hall.

“Now-a-days, a woman can look at a man while he prays without a one-way mirror or wall protecting her from his wandering gaze. A two year old boy can cross into the women’s section therefore triggering puberty early. I won’t re-open the masjid until we get $5.7 million to build the wall.”

Outside observers estimate that a total of 224 congregants have attended prayers at the mosque since it opened 4 years ago—many by accident, as it is next to a similarly designed Chick-fil-A—which means that they would all have to donate $25,446.43 each to build the wall.