Kyoto, Japan (1:00 P.M. GMT)— Developers and gamers from around the globe gathered at Nintendo headquarters today for the announcement of the next installment of the popular Super Smash Brothers video game series. While most of the gameplay will feature well-known moves and arenas, Nintendo also announced the addition of the beloved Creepy Uncle Sameer, the protagonist of Nintendo’s critically acclaimed Where You From, Flower Of Modesty? Creepy Uncle Sameer’s Taxi Chase. 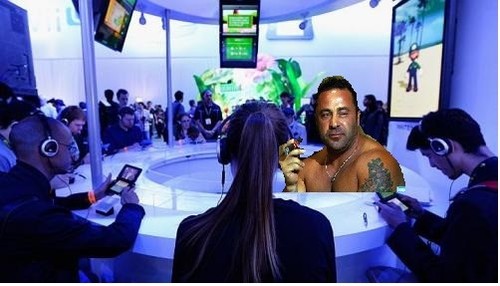 Gamers getting a sneak peak of Creepy Uncle Sameer gameplay.

Nintendo executives and developers took turns describing additional features of the game, but Creepy Uncle Sameer stole the show. Developer Nosiki Hiroto delineated what traits Creepy Uncle Sameer would take on in the latest edition of the game. “We can tell you now that his smash move will consist of giving taxi fare discounts to attractive women. We have also incorporated his famous confrontation with his own passengers into the gameplay.”

Excited fans of the game say they can’t wait for its release, commenting that the addition of Creepy Uncle Sameer was the perfect next step for the already successful Super Smash Bros. franchise. “I just can’t get over his awkward remarks to younger female family members, I hope the developers found a way to incorporate that,” said Ryan Sandoval, gamer and writer for VideogameNow. “A 10/10 will be warranted if the developers included his creepy one-liners that compare women to various inanimate objects.”

Although Nintendo is known for remaining tight-lipped, they have indicated that Creepy Uncle Sameer might appear in a cameo role within other Nintendo games.

Ahmed Rahil is a staff writer for The Hummus. You can contact him at the.hummus.news@gmail.com