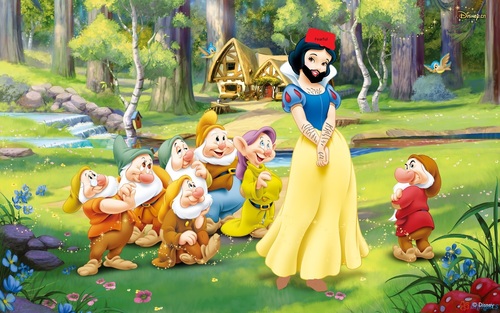 The lightly edited film will feature eight dwarfs, one of which is significantly taller than the rest. The taller dwarf, Fearful, is a new addition to the cast, creating diversity and what Minister Shahid called “a fun new character for the entire family to enjoy.” Critics of the changes were more concerned with the absence of Snow White, who seems to have been replaced by the new effeminate giant dwarf with an odd off-color black beard. We spoke with film critic Zafir Samaha, who told us the light edits alter the Disney classic’s story too much for his taste. “The whole story changes. Now this new taller dwarf is eating the poison apple, singing to woodland creatures, and eluding the evil queen.”

Snow White’s absence isn’t without a disclaimer, as the movie begins with a message, displayed in playful font, which explains Snow White’s realization that she had obligations to her family, husband, and society that took precedence over being out in the woods without a male guardian.

Although the changes to the original production were met with some displeasure, others welcomed the changes, citing moral grounds for their support. “Personally, I never thought Snow White belonged in the movie. She was distracting to me and the other pious men,” said movie-goer Khalid Sheraz. “I was confused as to why she was even there, other than to inflame the dormant passions of men.”