Almere, Netherlands (6:00 P.M. GMT)— Crowds were on hand in Northern Europe this afternoon as news emerged that Skittles had been ruled “Awesome” by the International Supreme Fatwa Commission.

The commission spent twelve days deliberating the permissibly and unfathomable tastiness of Skittles, both the original and tropical punch varieties. The commission members remained sequestered for the duration of their tasty responsibility, only emerging once a final ruling had been made. Shaykh Sameer Abu Saad gave us an inside look at the process surrounding the historic decision. “At first it seemed as though we wouldn’t have a consensus as to Skittles’ superiority over all other of Satan’s sad excuses for candy, but the holdouts were persuaded by good arguments and Skittles’ mystery flavor, which could only be an act of God.” 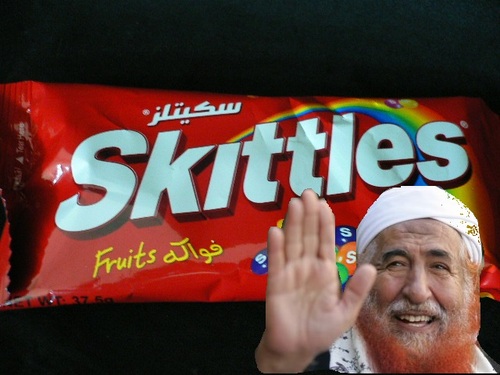 The commission had the options of ruling Skittles either:

4. Better than Snickers; or

28 year-old Skittles Connoisseur and Blogger Ramsy Ibrahim from Portland, Oregon called the ruling “momentous” from the basement of his mother’s home this afternoon. “Things are looking up for ole Ramsy. No more arrests for giving out Skittles at the nearby playground. It’s just a feeling of complete vindication.” Ramsy is one of only a few Skittles bloggers who has made the crucial link between Skittles suppression and the government’s secret agenda to propagate mind-controlling chocolate.

The ruling has outraged more conservative segments of the Muslim community, who prefer Necco Wafers to Skittles. “Necco has that wonderful chalky taste that grinds up against the room of your mouth, opening wounds in just the right parts of your cheek,” said 68 year-old Hatem Uthman. “Muslim youth want all the flavor without any of the severe permanent damage to their mouths, but what can I do? God guides whom He wills.”

The “Awesome” ruling puts Skittles in the same category as Good Will Hunting (1997), sweatpants, and Robert Downey Jr. Although the commission is satisfied with its ruling, Abu Saad feared polarization in the Muslim community. “We are well-aware of the dissent surrounding this issue, and that’s alright. But seriously, who tries a tropical flavored skittle and doesn’t immediately feel spiritually overwhelmed?”