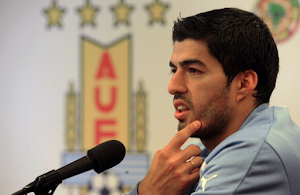 Rio De Janeiro, Brazil (5:00 P.M. GMT)– After receiving what some would call an excessive punishment by the FIFA Administration, Uruguay Forward Luis Suarez discussed his views on the remaining teams vying for the World Cup Championship.

Many international players, including Suarez, are impressed by the achievements of some of the surprise contenders. He described his conversation with Algerian players and staff where he learned of their intentions to “fast from biting any human being from sunrise to sunset, for thirty days in a row.”

Baffled by this revelation, Suarez told media sources that he has “nothing but respect for a person who can abstain from ingesting food, drink, and the flesh of other players for an entire month.” He quickly noted that this leaves each Muslim player with “approximately 8 hours in the evening to load up on carbohydrates and bite people in preparation for the next day of tedious exercises.”

Suarez now says that in solidarity with his Muslim counterparts, he will also fast from biting other players in the tournament. “I’m going to start with a half day. You know, baby steps.”

Layla Sabry is a staff writer and World Cup Correspondent for The Hummus.

She can be contacted at hello@thehummusnews.com