Burbank, CA (5:00 P.M. PST)– Experts from around the nation gathered in Burbank this afternoon to announce the complete halt to any and all arranged marriages planned within the Muslim community following Ryan Gosling’s sudden conversion to Islam last night. 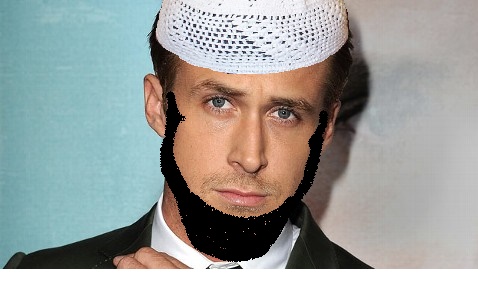 Gosling is confirmed to have attended the evening prayer at the Burbank Muslim Community Center last night, where he professed his new faith and prompted the fortification of the wall which separates the men’s and women’s prayer hall. Witnesses described the scene last night as “gruesomely handsome” and “drop dead haram-status gorgeous.”

Fathers across the nation awoke to discover the news of Ryan Gosling’s conversion, immediately terminating any and all marital agreements with less handsome suitors. “My phone blew up with texts about the news,” said father and doctor Uthman Siddiq. “It was all so fast. I immediately called up Farouk Mehdi and let him know the arrangement between our families was off because, you know, it’s freaking Ryan Gosling. And if you haven’t seen him recently, he has come a long way since his performance in Remember The Titans.”

Not everyone is happy with Gosling’s conversion to Islam. Adil Ramsi, a 32 year-old single architect believes the conversion of Gosling will negatively impact society for the time-being. “I waited 10 years. 10 whole years for Saad ‘Beach Bod’ Tamir to get hitched. And now this? Also, it’s bad for the community somehow,” said Ramsi. “Every female profile on Halfourdeen.com and shaadi.com has suddenly disappeared, this is outrageous.”

Gosling will be attending the Burbank Muslim Community Center fundraiser tomorrow night, where he is expected to be overwhelmed by enthusiastic Middle-aged men with single daughters.