Guy At Back Of Iftar Line Realizes Kabobs A Lost Cause, Will Wait For Eid 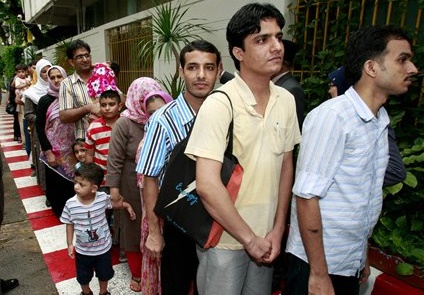 Baltimore, Maryland (8:31 P.M. EST)–Citing his position as 57th in line, Rameez Jasid concluded this evening that the kabob supply would be exhausted before he even got to the paper plates at the Sami family’s annual iftar.

Undisclosed sources confirmed that Jasid arrived two minutes prior to sunset, leaving him at the back of the line with the children and people who pray Sunnah instead of running into the line. Defeated, Jasid collapsed into a nearby sofa, realizing that any chance at Auntie Marwa’s delicious kabobs had vanished.

“Jasid understood what everyone else understood: Uncle Yusuf was fourth in line and they call him King Kabob at the mosque,” said “Abu,” going by an alias for his and his family’s safety. “He puts a couple of kabobs on his paper plate, takes the tray of kabobs, and leaves his plate.”

Contemplating what to do, Jasid decided to say his salaams and leave. As he gravitated to the door, Yahya Lakmi, the kid who drank all the Dr. Pepper and left only pineapple-tomato juice for the rest of the attendees, announced that the iftar host was ordering Chicken Tikka Masala for the people that didn’t get any food.

Uncle Yusuf had already moved on to dessert. Unfortunately, the Tikka Masala rescue failed to materialize due to a disagreement over whether they should order from Shalimar or ‘Kabob and Curry.’

Jasid has made plans to arrive a full hour earlier than necessary on Eid day, when Auntie Marwa’s kabobs are expected to be available at the Post-Eid Luncheon.

Layla Sabry is a staff writer and Iftar Gathering Correspondent for The Hummus.

She can be reached at hello@thehummusnews.com