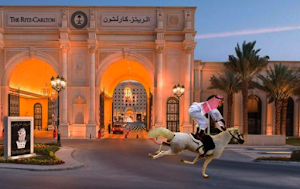 Mohammad bin Salman, Saudi’s Crown Prince was dealt a major blowback today when Prince Al-Waleed escaped the Ritz Carlton, where he was held captive facing bribery charges. As of two weeks ago, Bin Salman has taken it upon himself to arrest anyone involved in bribery or corruption. The merciful Crown Prince has allowed the arrested to remain held at the Ritz Carlton while they await trial – something that has been appreciated by some but not all of the captives.

Prince Al-Waleed was one of them – seen escaping earlier that day to a nearby Four Seasons Hotel. “I couldn’t take it” said Prince Al-Waleed, a man accustomed to 7-star hotels, “they only changed the bed sheets once a day. The U.N. will hear about this.”