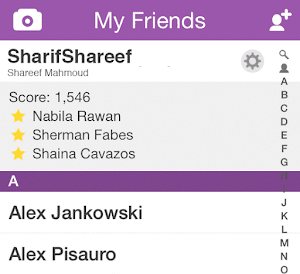 Manhattan, NYC, NY(5:00 PST)–Last week, Snapchat made two announcements that had Muslims around the world use the smiley face emoji. The first one came early in the week when Snapchat announced that, in an effort to combat finger anorexia, users no longer had to hold their finger down to watch a video or check out a photo. Instead, only a tap of the finger was required.

The second announcement came in the middle of the week when Snapchat announced it would feature The West Bank as one of its live stories. While Muslims with fat fingers and Palestinians, who have undoubtedly mentioned to you that they’re Palestinian, are now happy, there is a subset of the Muslim population that is still disappointed with Snapchat.

While the two releases made waves in the Muslim communities, Muslims, like 21-year-old Anissa Rawan of New York complained that she wants Snapchat to bring back her favorite feature, “Best Friends.”

According to Rawan, “Best Friends lets me see who was talking to who and then I could look at their score and know that they were talking a lot. I used to use it to see who Shareef was talking to because he’s the second, sometimes third, cutest guy in the mosque. Turns out, him and Nabila were Best Friends on Snapchat so I think they’re getting married. But now I’ll never know. And of course, Nabila won’t ever say. She won’t even say whether she buys the samosas at a store or makes them from scratch for her dinner parties.”

Others are elated by the move to phase out the “Best Friends” feature. “I don’t feel pressured to snap Hiba all the time anymore,” said Marwa Biyani. “Totes don’t need her daily blasts to people falling off her Best Friends list in my life.” Marwa wanted to add that Hiba always looked hideous in that one Calvin Klein hijab she always wears to iftars.

Layla Sabry is a staff writer for The Hummus and can be reached at hello@thehummusnews.com.