Al-Qadisiyyah, Kuwait (11:00 A.M. GMT)— Masjid Al-Farukh spokesman Samir Qays was thrilled to announce the completion of a new, state-of-the-art, completely virtual online women’s prayer hall this morning. The online prayer hall will be accessible from any kitchen, living room, or other portion of the womens’ homes. 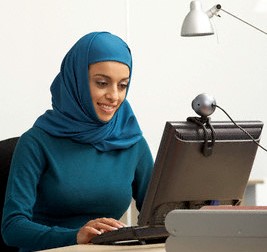 The cloud-based forum features 1,400 square feet of e-prayer space, along with unlimited free “prayer tokens”, which can be redeemed for various cooking recipes. “That’s 400 square feet larger than the boring old physical prayer hall that men must endure.”, said Qays.

The Project is not without its critics. One of the main concerns regarding the project is cost. Leasing the  domain name (stay-pray.com) alone will set the Mosque back $12.99 (USD) per year. The cost of male guardians to access the internet for women using the service has also worried community members.

Despite the cost, Masjid Al-Farukh is confident that the large investment will pay dividends. “Anytime you spend this much on state-of-the-art technology, you’re going to turn a few heads. But hey, this is Al-Qadisiyyah, we’re not exactly known for taking a backseat when it comes to this stuff.”