Radical Imam Tears It Up On The Half-pipe 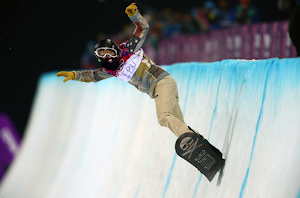 Sawany, who is competing on behalf of Islamic Principality University, stunned the Sochi crowd with his gnarly 360° inverted hand plant, extreme 720° ollie into a tail-grab, and flawless double back-flip. He also successfully unveiled “Solo Scholar” for the first time, a move in which he throws sandals at the crowd while performing a daring 180° nose-grab. His score of 96.23 from the judges booth proved too high to top for even the most seasoned of competitors, including U.S.A’s Shaun White and Switzerland’s Iouri Podladtchikov.

Sawany’s latest accomplishment has the snowboarding world raving, with some fellow aficionados calling him “the most radical imam out there” and “the baller to-Islam caller.” Despite the praise, Sawany is humbled by his success. “I’m totally stoked, praise be to God. But I wouldn’t be here if it wasn’t for Shaykh Sami ‘preach-so-hard’ Madressi, who tirelessly trained me between sunnah prayers.” Sawany was been described by contemporaries as “an extremist when it comes to perfection” and “a fundamentalist in the pipe.”

Sawany wasn’t the only IPU representative on the half-pipe today. Teammate Imam Jassem Baroudi placed 12th in the Men’s Half-pipe with a score of 76.89, a respectable finish for the first-time competitor.

“Baroudi has potential, we’re all going to be watching him at next year’s Islamic Inter-slope Trials,” said sportscaster and analyst Jason McCurney. “But for now, he’s definitely still a moderate-to-liberal imam. Sawany is definitely the most radical.”

Sawany has announced plans to fast from being “beyond awesome” during the Holy month of Ramadan.

Zayd Unis is a staff writer and Winter Olympics Correspondent for The Hummus. He can be reached at the.hummus.news@gmail.com